One of Spain’s lasting legacies in the local food scene is Filipino merienda, a light single dish mid-morning or mid-afternoon snack.

Unlike the full meals served during breakfast, merienda serves as a short, often sweet, break in between full meals. Filipinos have inherited this light snack from their Spanish colonizers, although such meals are not uncommon in other places in the world. It is also commonly practiced in Italy and other southern European countries.

Although the Philippines has gained its independence from Spain more than a hundred years ago, the Spanish merienda legacy continues to live on. Merienda is eaten twice a day — between breakfast and lunch, and between lunch and supper.

The unique dishes served as mid-morning, or mid-afternoon snacks are often influenced by region, where there is an abundance of certain ingredients or weather patterns. For example, pan de sal with cold lemonade serves well on a hot afternoon while champorado or pancit mami is excellent on a rainy day.

Here are some of the most popular merienda dishes from various parts of the Philippines. 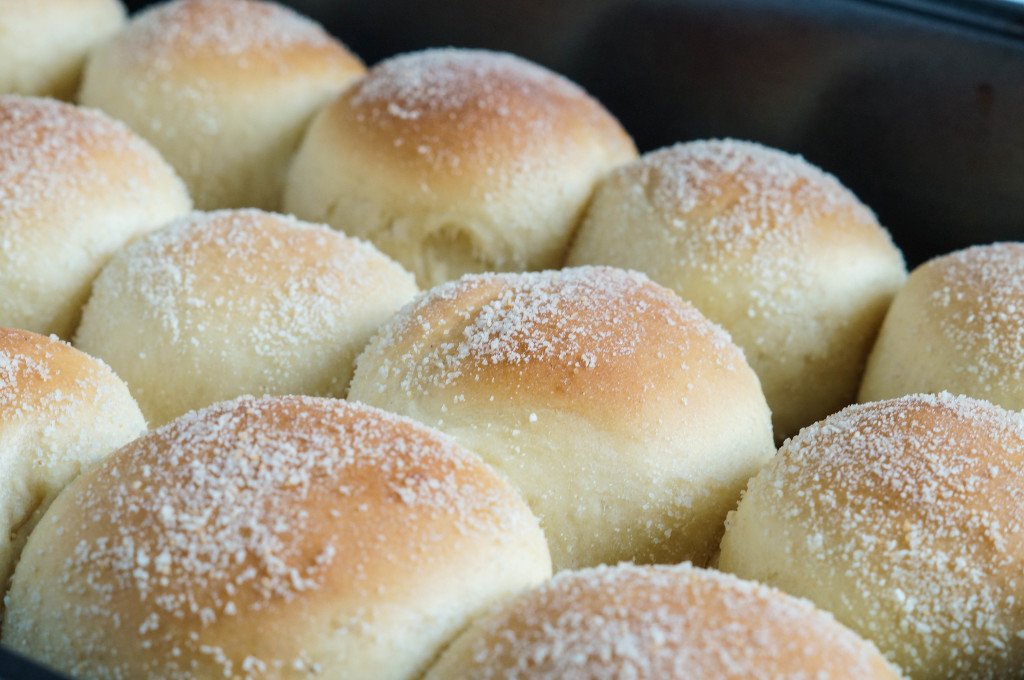 Just one of the several baked and pastry goods Filipinos are fond of, pan de sal is a quintessential fixture in a typical Filipino merienda table. Served best as hot off a neighborhood bakery’s oven, pan de sal can be served plain. It can also be dunked in a hot black coffee or stuffed with Star Margarine, Eden cheese, or any other favorite filling. 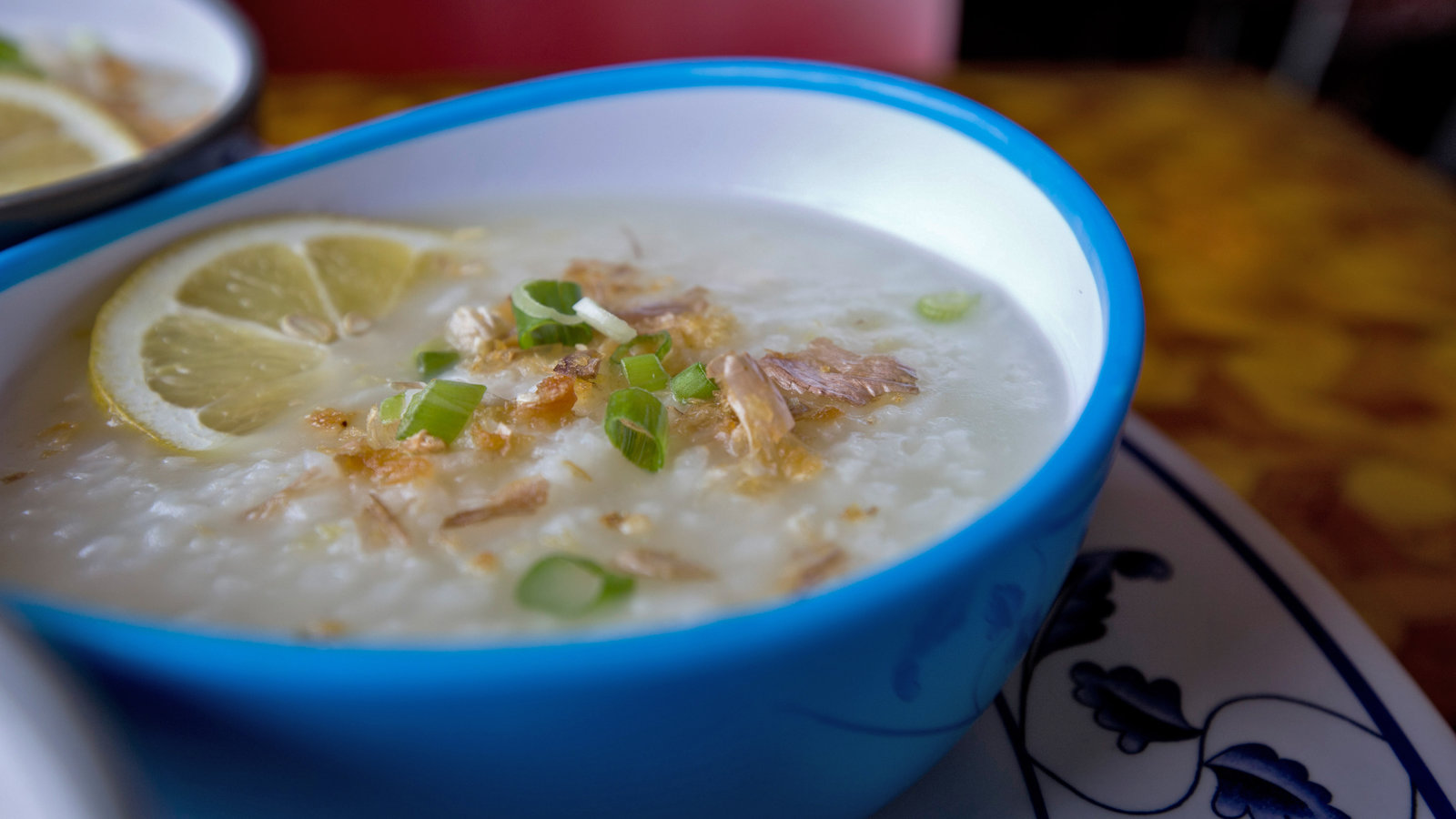 Lugaw is the Filipino version of congee, a type of rice porridge best served with a concoction of various ingredients or a stand-alone serving, especially during chilly, rainy days. To make it more tasty, boiled plain lugaw in ginger-flavored broth with cooked pork and meat tofu sprinkled with finely cut onions. Other variations of this Chinese-influenced dish include chicken arroz caldo and goto. 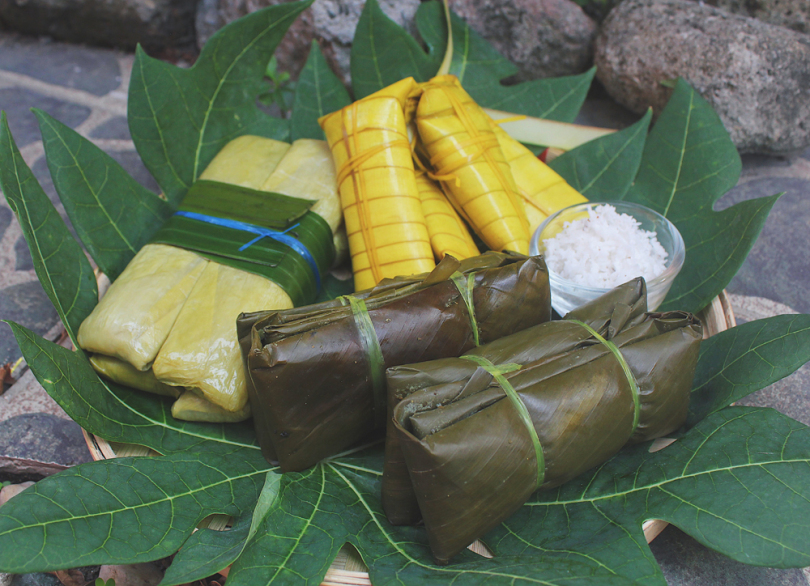 Suman is a cylindrical shaped, banana leaf-wrapped sweet merienda treat that comes in a variety of ingredients. It is often made of glutinous rice (malagkit) cooked in coconut milk, usually wrapped in banana leaves or buri palm leaves for steaming. Other variations include suman ibus, tupig, and budbud. 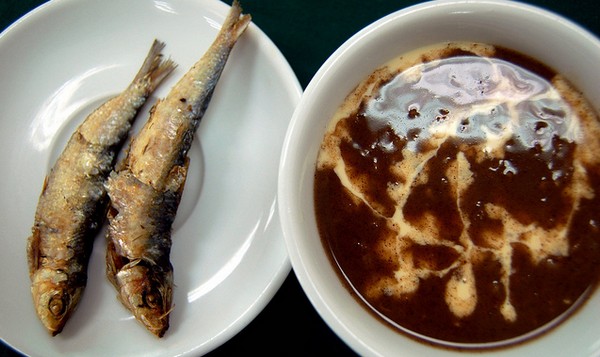 Champorado is a variation of the lugaw recipe, with the vital addition of Filipino chocolate, and sometimes coconut milk to enhance its flavor. It is often served with a topping of condensed milk and enjoyed with dried salted fish. It is so easy to prepare: just boil water, add table and rice and stir until cooked. 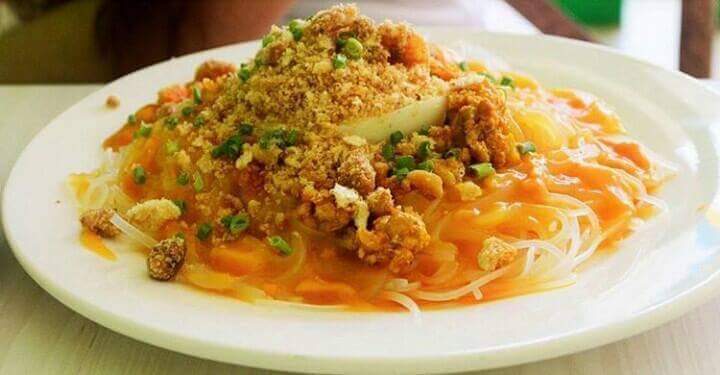 Pancit palabok is a variation of noodle dish with shrimp sauce that is topped with several ingredients. Additional components include cooked shrimp, squid rings, spring onions, crushed chicharon, tinapa flakes, and so many more. While it is sometimes part of a big feast like typical Filipino gatherings such as fiestas and birthday celebrations, pancit palabok is also a popular choice for merienda. 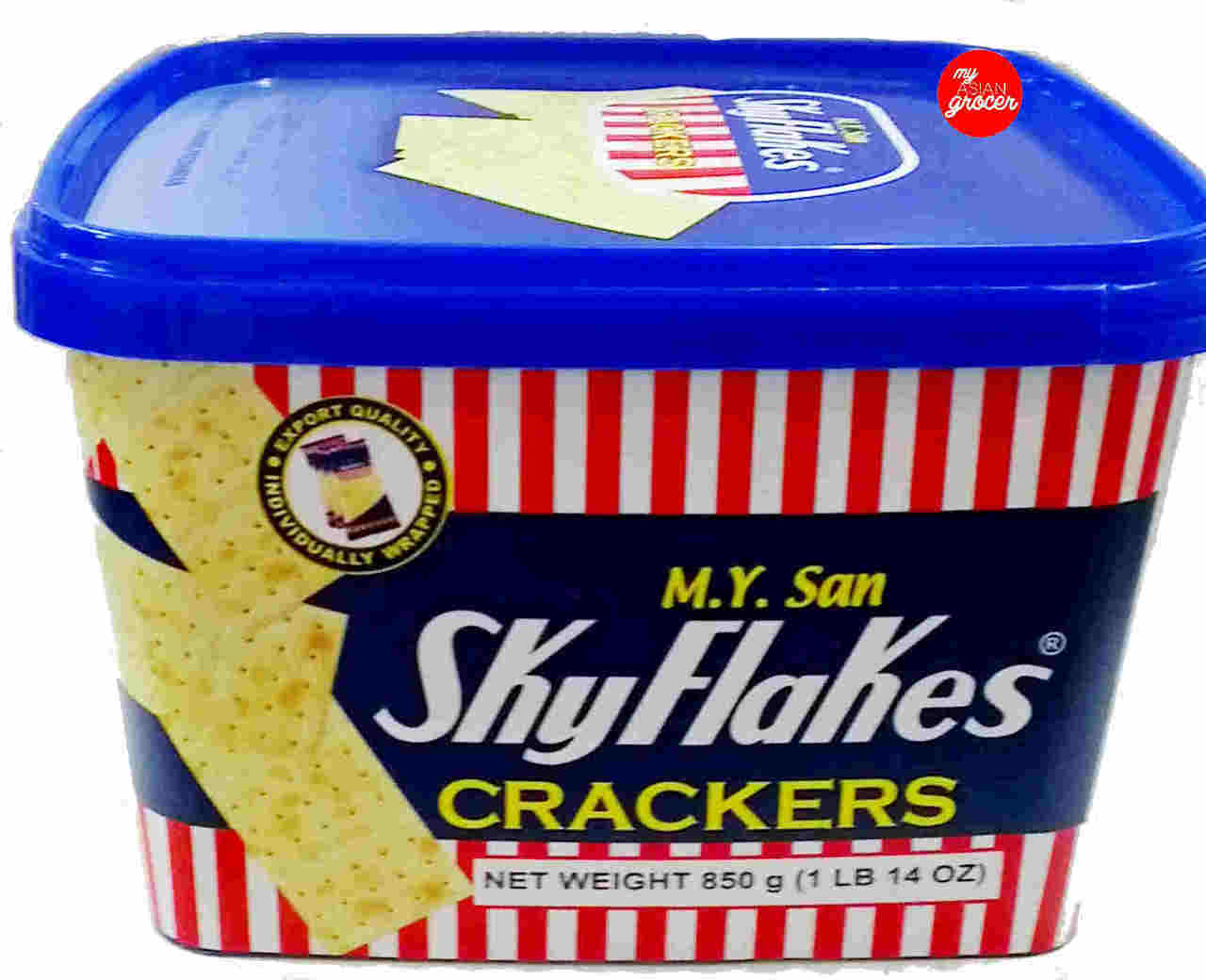 A simple way to treat hunger during merienda time is a pack of crackers that come in different flavors. Classic servings include Sky Flakes, Butter Coconut, and Rebisco Crackers that come in different variations such as garlic, cream, and chocolate. Crackers are often available at a neighborhood sari-sari store and can easily be paired with a soft drink or cold water. 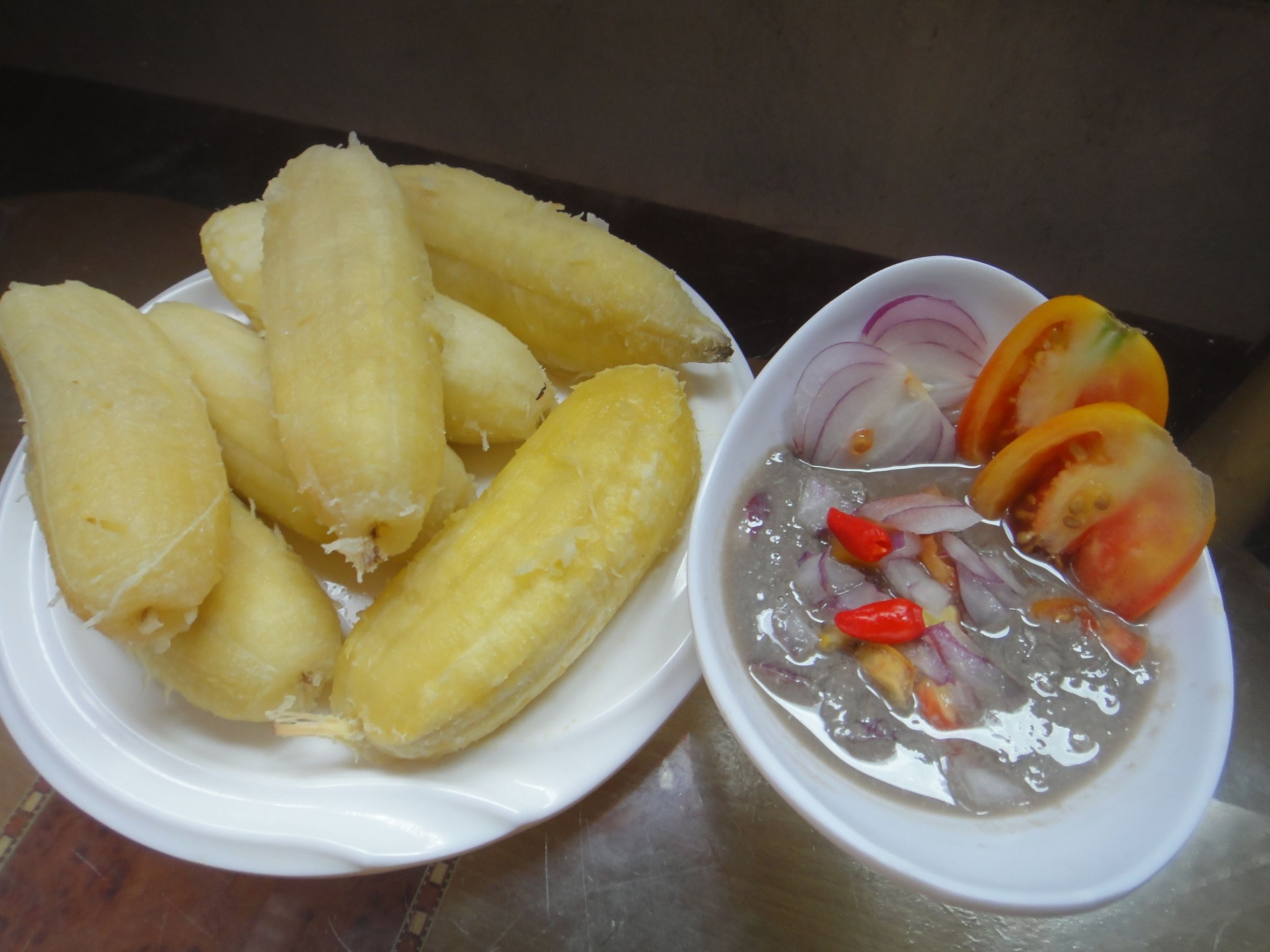 Banana is abundant in the Philippines, so it’s not surprising to find several versions of banana treats for merienda. One popular choice is banana cue, which is made of deep-fried saba variety and coated in sugar. Other versions are turon (banana wrapped in spring roll wrapper and fried), ginanggang (broiled bananas and coated with margarine and sprinkled with sugar), and pinaypay (sliced ripe bananas coated with flour and deep-fried). But if you prefer not fried, boiled bananas, usually unripe, dipped in bagoong, and red pepper, is also a mouth-watering merienda option.

You’ll never get hungry during merienda time in the Philippines as you’ll have plenty of options to try and enjoy. Most of the choices are savory, and it is best to try them all before sticking with your preferred choice.

This site uses Akismet to reduce spam. Learn how your comment data is processed.

Frying may be one of the first cooking methods you'll learn in the kitchen growing up. Heat oil in...
Kitchen

How Food Chopper Helps You In Your Daily Kitchen Routine

Top Pinoy Foods We All Crave For